A fabulous promenade and a bunch of streets in Elektrostal

In the year of 2019 году the company «Svetoservice- Moscow area», which is part of ILEC «BL GROUP», carried out two kinds of activity in Electrostal within the framework of the program «Light city». The first activity was the works on architectural and artistic lighting, the second —capital repairs of the outdoor lighting.

Architectural and artistic lighting was done again in Lenin prospect, which is the cultural and historical core of the city. It is important to appraise the results of these works within the context of complex landscape improvement, which was initiated by the city authorities with the aim of making new pedestrian zone in the center of the city. The length of the prospect from the crossing with Sovetskay street until the intersection with Koreshkova street obtained the settled role of public space in the city landscape, which is used for various festive and cultural open air events. 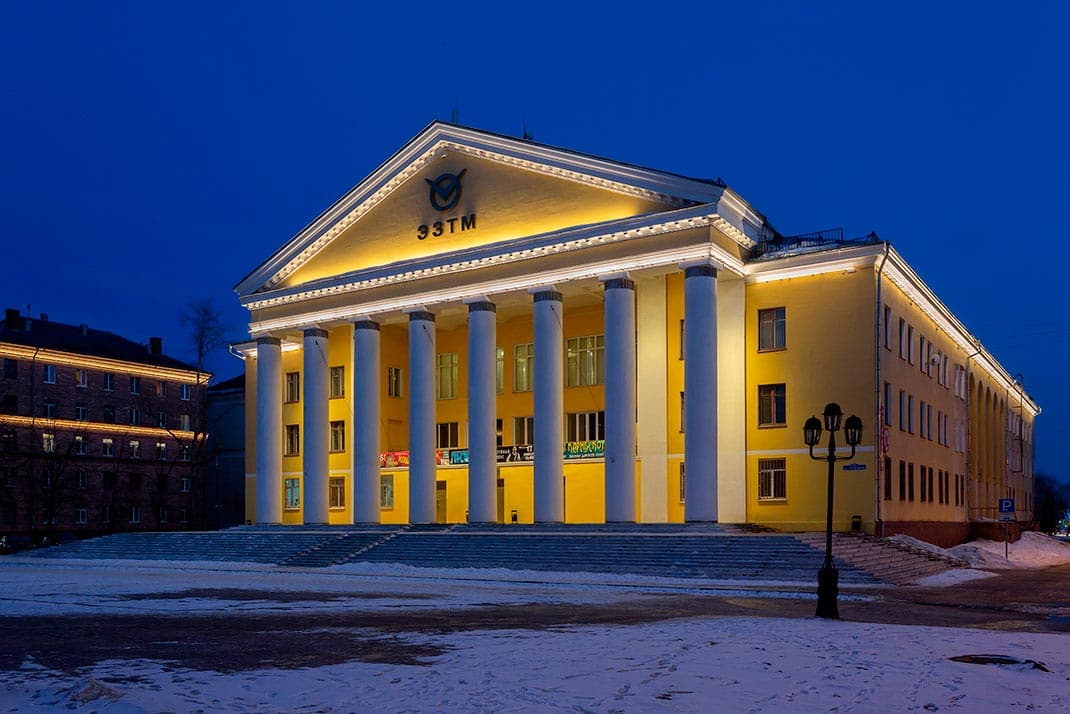 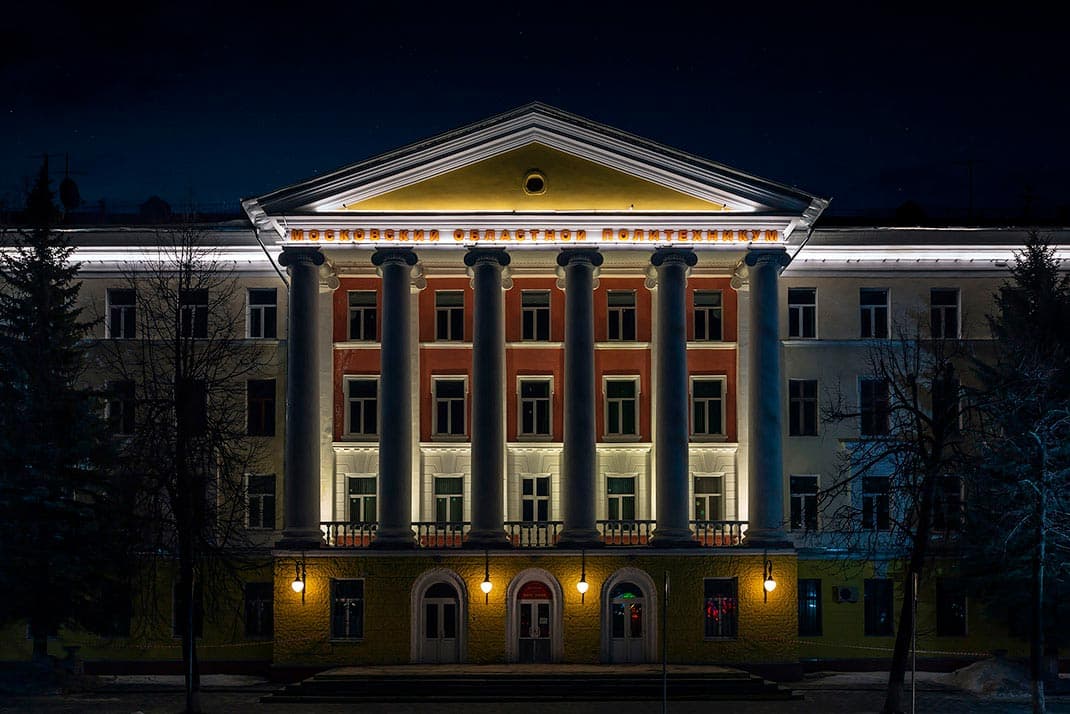 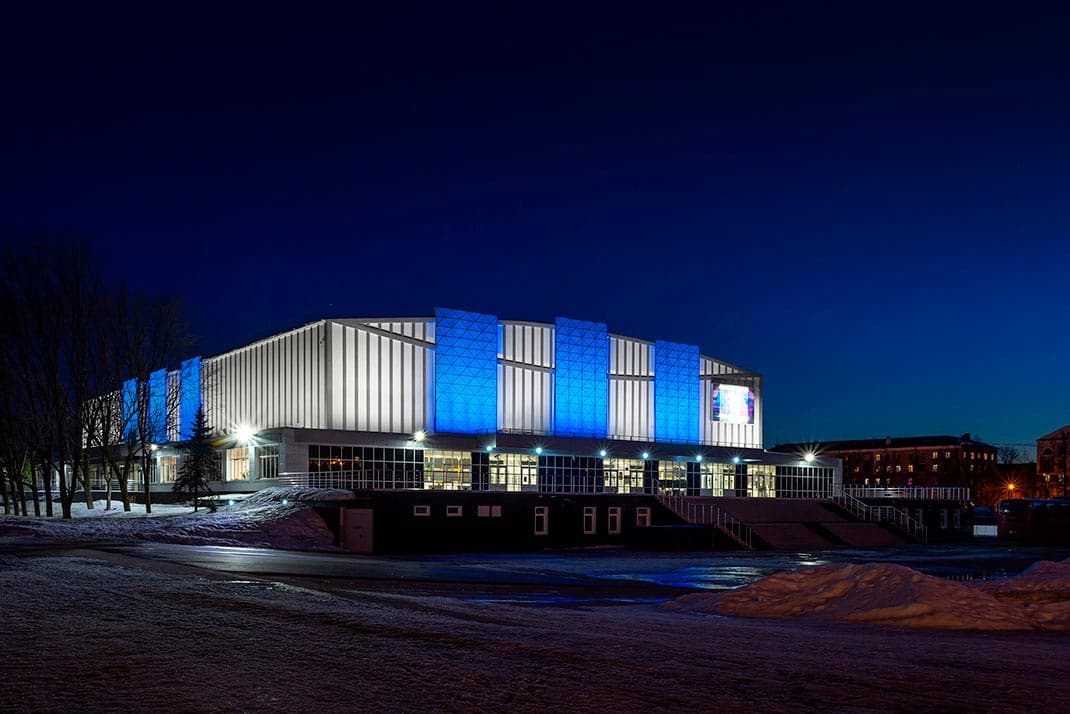 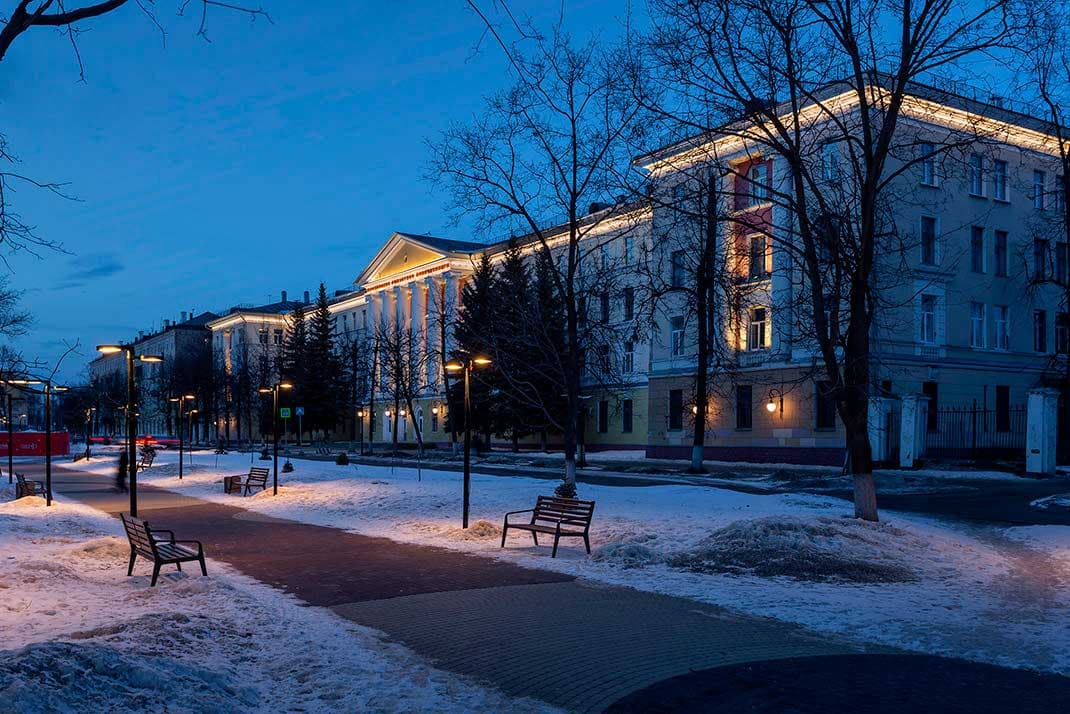 The Administration of Electrostal, the architectural and city planning Department in particular, became seriously interested in developing the light and color environment of the city. So, its officers requested the consultation of the famous light designer Mr. Karsten Winkels, asking him to evaluate the existing environments and propose the beautification options.

In the year of 2018 some objects in the prospect have already got the new illumination, and now the basic concept of lighting solutions, based on lighting fittings “Kontur LED” by GALAD was continued. The buildings №36, №39, №42, №43 и №45, constructed in the style of “ Stalin monumental architecture” together with the buildings, illuminated before — such as Cultural center «October» and the Moscow regional polytechnic college , create the architectural landscape ensemble with the complete composition. And it is lighting, that is the connecting link between the decoration of the front facades of the buildings, including pillars and bows, and green plantations. Due to the well-designed illumination, the buildings look like the pictures in the gilded frames in the evening time, and the architectural forms amaze us by the emphasized plastic. And it is not by chance, that the light coated buildings and the lane in necklace of lights became the most popular decorations for the photo sessions and selfies among the residents of Electrostal.

The plan of capital repairs of outdoor lighting covered the following streets of the city: the cluster of Metallurgov, Chekhov, Chapaev and Zavodskay streets, Trudovoy and Metallurgov passages; Ostrovsky street; Krasnay street (section from GSK-13 to Zhuliabin street); Komsomolskya street (section from Vostochnay street to Michurin passage); lane between Zhuravlev street and Zapadnay street. The lighting fittings Fakel LED by GALAD were installed in the lane, all the other objects were lighted by Volna LED by GALAD. The wide range of metal constructions by OPORA ENGINEERING was used: the power flanged faceted lighting poles as well as non power flanged faceted poles, «Standart» and «Vektor» lines brackets. Outdoor lighting control cabinets, manufactured by the company «Svetoservice-Telemechanika», which is also part of the Corporation, were installed on some objects.